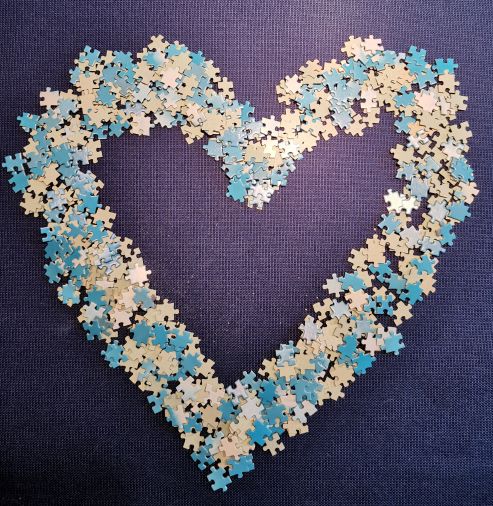 I had to call my counsellor again on Monday. I would have normally dealt with the anxiety and overwhelm on my own but because my job required me to attend the Monday night meeting, I needed to quickly tidy up my spinning head before 7pm. We had a ten minute call in which I breathlessly explained that things were getting really tense at work, there was a lot of conflict and hurt around, and I was scared of attending this meeting in which I’d be stuck in the middle of it all. She very gently got me to slow down and speak clearly, and asked me why the conflict was bothering me.

‘Why? because it’s really scary when people are fighting and I can’t do anything.’

‘Is any of it directed at you?’ she asked patiently.

‘No, but it’s about people I care about and I’m worried for them and it’s, it’s just really scary.’

Yes, worrying about people is one thing, but why do you think you find the conflict so scary?’

Very good question. We worked out that it was probably something to do with me being the middle child of a huge family, and hating the fights between my siblings and feeling unsafe because there was no grown up to solve it.

By the end of the call I was breathing steadily again, and started to get ready to log on for the virtual meeting, when I got a call from my line manager to say I didn’t need to attend after all.

And also thank you that his call came after the counsellor’s because the anxiety had pushed me to get some professional guidance which I would have otherwise missed, and which has given me a lot to think about in this tumultous week.

I always avoid conflict, my own or anyone else’s. I try to find a place of understanding and compassion so that I don’t have to challenge anyone, and I absolutely avoid upsetting anyone. I thought everyone was like that but I realise only some upbringings teach you that conflict has to be avoided, which is not always the best way to address problems. The heavy difficult issues brew all around me, and while I have real concern for those involved, I can’t actually solve any of it, and can only deal with my own response, which is a predictable return to anxiety, where we started back in February. And again it is about not feeling safe, feeling helpless, but this time it is triggered by people I care about fighting. Today I woke up with that familiar heavy crippling exhaustion that my body chooses to settle for when it has run out of adrenaline. We had all the heart racing fear of Monday so now we have the lethargic sleepy numbness on the flip side.

Which is highly unproductive and needs dealing with. Because the most useful thing I can do now is take care of my own mental health so that I can at least do the bits of my job that I am responsible for. And so, with a quick search, I have found a very helpful TEDx talk for today’s learning.

Conflict is a natural healthy part of any relationship, but it doesn’t mean we like it. If you had a life-changing experience of conflict early on, your body makes a decision. So now if disagreements arise, your body floods with fear because it feels that it’s not safe to have conflict. CrisMarie started tracking and managing the situations around her, to avoid conflict. She focused on what people wanted from her, to make sure they were happy, and became a subsequent high achiever and professional conflict avoider.

Think about what you learned about conflict growing up, and look at how you deal with it today in your teams and relationships. We all have our personal triggers and our nervous system responds with fight, flight or freeze. In a team situation, you start with an awesome vision, you get smart people and passion and the strong opinions cause conflict. We don’t like it, so deal with it one of three ways: 1. Peacekeeper who says ‘fine, we’ll do it your way.’ 2. By taking charge and doing it your own way regardless. 3. Avoiding it, staying out of the way till it’s resolved. And then there’s no progress and projects stall.

There are two magic ingredients that transform conflict into creativity: VULNERABILITY and CURIOSITY. Vulnerability is not about being weak, it’s a willingness to expose oneself to danger, to be honest about what’s really happening, to say what you think, feel and want. Curiosity is the willingness to own your judgements, but at the same time be curious about a different perspective. Be willing to consider that there’s more than one right way, truth or possibility, and get over my need to be right.

Susan got sick at 23, and doctors saw evidence of scarring and sexual trauma which she didn’t remember. After investigating it, she found memories of horrible acts by a camp director which no-one wanted to acknowledge or speak about. She was diagnosed with cancer, and she had to get curious about her cancer, and her memories. She went to a healing circle, at which a Catholic Priest was invited. Everyone had anger to express to him and he got vulnerable – he said I recognise I represent an organisation that has made mistakes, and I have made mistakes. Then he got curious. He said tell me what you feel. And everyone did. It was incredible, and after that experience Susan’s tumors were gone. She believes that dealing with conflict like that healed her.

Conflict is an energy source. Stop looking for safety outside of ourselves and tap that amazing resource. Next time you get caught in conflict, use it, don’t diffuse it.