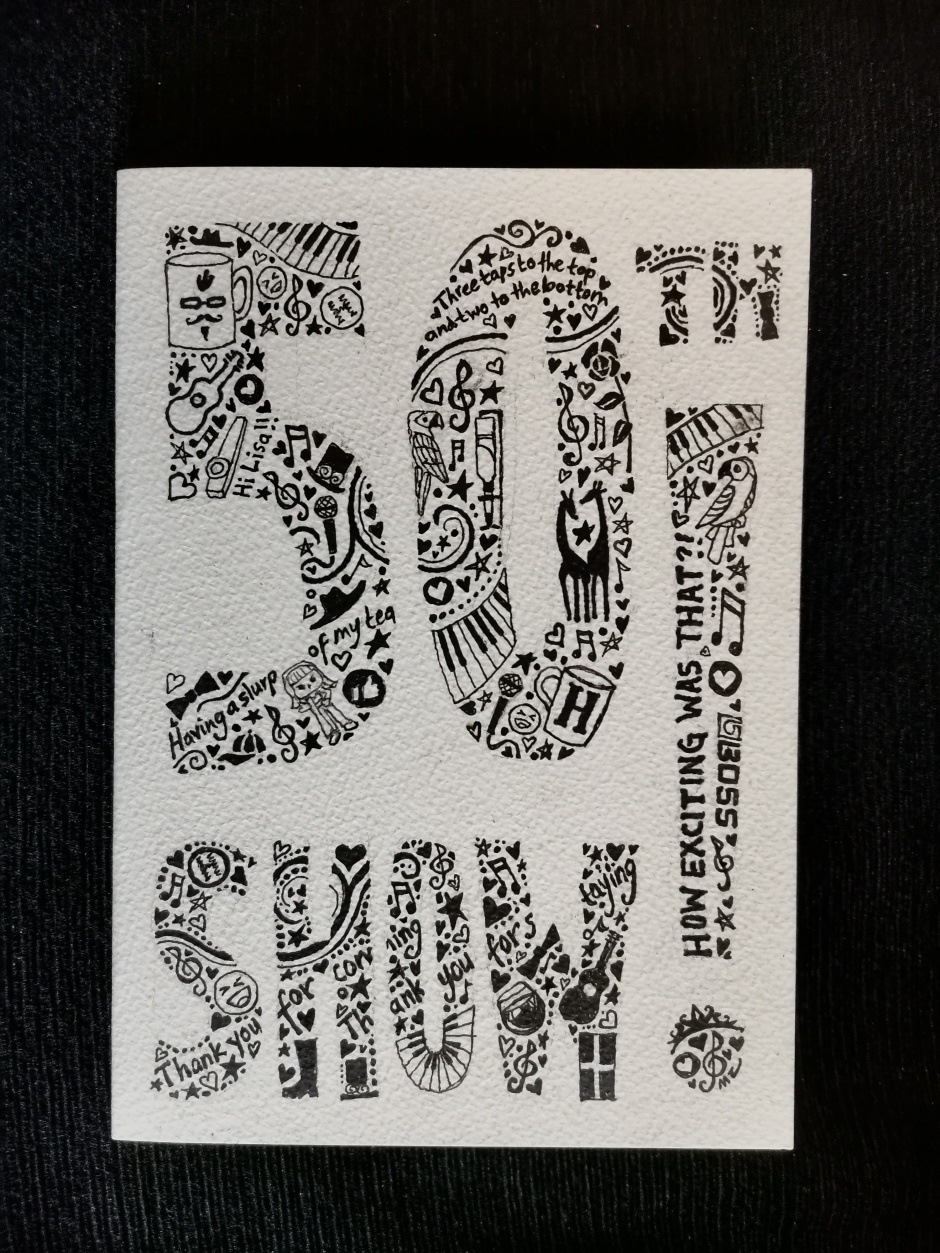 My partner has a friend from school who is a musician in Cornwall. Since March, and since he is a musician, Helm De Vegas has been doing live stream shows from his piano at home, three nights a week, and we have been tuning in at 7pm every time. His incredible skill on the piano, his fabulous singing voice and his quick-witted hilarious interaction with his online crowd have kept us coming back every time.

His first show, a tribute to Kenny Rogers, was 17 minutes long. He took requests for the next show, then did a special ‘Songs From The Shows that Friday. By then we were hooked and have signed in to his live Facebook feed every Wednesday, Friday and Saturday since. We sing along as he belts out classics like Country Roads, Over the Rainbow and Fields of Gold, and share photos of ourselves dressed up in whichever theme is chosen each week. We’ve had Country Music, BeeGees, Boybands, and my partner even got his tux out for Ratpack night. Between songs Helm responds to the comments as his fingers trail up and down the keys, punctuating his chatter with snippets of musical background. Viewers across the country join him with applause, laughter, and singing along – including the many happy birthdays to members of the group – as well as the obligatory theme tune for one of the regulars, ‘Doc doc doc doc doctor Pete.’

We have watched with delight as the number of viewers listed in the corner went from the low thirties to the regular fifties and sixties, till tonight when he has just reached 143.

He has been building up to it over the past few shows, heralding the exciting event of his FIFTIETH SHOW!!! ‘Get your requests in for the FIFTIETH SHOW!!’ he grinned last week, explaining the details to the screen as his fingers idly played chords up and down the keys. His piano, positioned in a corner of his house between a door and a banister, has accumulated a range of gifts from his viewers over the past three months. Since his banter between songs is interspersed with a sip of his tea, one viewer has made him a personalised mug with his logo and catchphrase ‘Having a slurp of my tea.’ Helm’s lovely wife Lisa has been bringing him his glass of rum and coke, so another friend sent him an optic that was very excitingly fitted to the piano with a bottle of rum a few weeks ago. My partner sent him a Shania Twain figurine after Helm had made reference to her during the girls night show. His gold medallion that his wife made him for boy band night hangs over the music stand next to his often utilised kazoo.

For tonight, the occasion of his 50th show, one of his viewers has designed a T-shirt to celebrate the event, a black tie dress code has been agreed and Helm even appeared on Cornwall local radio this morning to talk about his Lockdown milestone. My partner and I excitedly made a card with a huge 50 on it, full of musical doodles, pictures of his piano ornaments and a few of his catchphrases interspersed, and got that in the post in time for today.

This evening we tuned in at 7pm, to see Helm’s piano corner full of lights and balloons but no Helm. Our ’50th SHOW!’ card had appeared on the piano next to the rum. The comments had already started piling in – ‘Brilliant!’, ‘Twinkletastic’, ‘My heart’s pounding.’ as the tantalising chords of Also Sprach Zarathustra resounded and suspense built in the empty corner. At the final crescendo the door behind the piano flung open and Helm appeared in full black tie, grinning and nodding at the screen until the music finished and he blew his plastic horn and shouted ‘FIFTY SHOOOOOWS’

He grinned at the screen, turned on some extra colourful lights, sat down and after a little celebratory dance, started playing his impromptu jingle.

My partner and I beamed at each other. Oh he’s so happy, look at him!

Helm couldn’t stop smiling, in his perfect mustache and pointy beard, grinning as he watched all the comments flood in.

‘My WORD, How lovely to see you all, even though I can’t see you, but you can see me.’

‘No, I’m not sure I’ve mentioned how many shows it is Mr M, let me just point out my fiftieth show card up there. Thank you for that lovely card. Yes, fifty shows! I don’t know if I’ve mentioned it, it’s FIFTY SHOWS!’

He carries on gleefully. ‘Alright, I’ve got 600 songs for you, I’ve got Party poppers – woooooo! I’ve taken as many requests as I could, and my lovely wife, she’s gunna be featuring in a few of them, I know a lot of you will be excited about that. I hope you’ve got a drink because we could be here all night!’

Helm has a rule about not repeating tunes that he’s already performed, but in the preceding weeks he had suggested that maybe the 50th show would be an exception. We were wondering what his first song would be, and as the opening chords of the Piano Man start up and I turn to Mr M and grin – ‘Of course! How perfect!’

And as he plays, and sings, and raises his eyebrows and his voice at just the right moments, I am in actual awe of this man. Not just his skill, his musical dexterity and effortless performing, but the fact that a man on his piano with a video phone has created such a community of love and connection. The comments, hearts and smiles all pile in as he plays – ‘You literally ARE the Piano man!’ – and I sing along and grin at the screen.

Next is a request of Dying in your arms tonight for Doctor Pete and he manages to get the Doctor Pete theme tune it at the end, before the exciting first appearance of the loop pedal for Hansel’s Mmmbop. My love has brought me another gin. This is so lovely. Helm is still grinning as he reads and responds to the comments. ‘Yes Dad you can take your dickie bow off now if you like!’

Lisa joins him for a beautiful duet of ‘I know him so well’, dressed in a gorgeous black dress with glamorous hair and jewellery, she stands just behind him with one hand on the banister, smiling at the camera as she complements Helm’s voice with perfect harmonies. The comments full of love for Lisa trip over each other in everyone’s gushing effort to pour out hearts and clapping hand emojis for her.

They finish the song just bursting with happpiness and love. Helm turns around to kiss Lisa, she beams and waves at the camera before disappearing. Helm grins and sighs as he leafs through his music.

‘Oh my word, that was lovely!’ He shakes his head, as the pink and blue lights flash behind him, and he turns to the screen, his smile filling his whole face. ‘Do you know what, I love you all. Thank you so much for everything.’ A thought crosses his mind. ‘Please note, that just because the pubs are going back to work tomorrow, I can’t gig anymore, and I am still sat at my piano. I appreciate that a lot of you will be going back to the pub tomorrow. You know, I wont be going back to the pub tomorrow. So as long as you keep coming, I will be here, my beautiful wife will be here. Keep coming. I’ll be here. Love you all. Thank you.’

It’s quarter to ten when he reaches the last song. Across the country, from our various living rooms and kitchens, we are all tied to our screens, connected together in joyous celebration of this amazing community of music, love and laughter that Helm has created.

‘There are streamers all over the piano!’ He exclaims in delight. ‘My word, look at the length of this show! Before we disappear from the 50th show, let me bring my wife back in. Wasn’t she fantastic, my lovely wife?!’ Lisa appears again, smiling and waving at us, before Helm launches into his finale, which turns out to be a 25 minute rendition of We are the World. Towards the end, at one of the chorus crescendos, a confetti cannon explodes over the room, Lisa appears grinning to provide backing dancing and singing to the last few rounds of the chorus. And the next few rounds. And a few more. We never want it to end. Lisa is laughing as she picks up the confetti from the floor to create a constant colourful fluttering cloud over Helm as he continues to play, throwing his head back in sheer joy, thanking everyone over the harmonious loop pedal backing vocals.

‘We are the world, we aaaaare the children’

‘Ah I love you all. I might just go and have a small cry.’

It’s true we make a better day just you and me.

Just you and me.